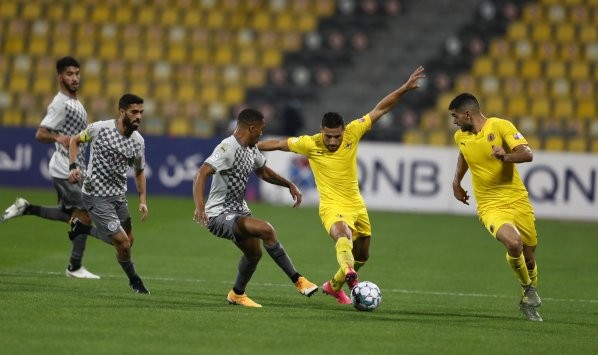 Consistent scorer Anthony Okpotu put the hosts ahead in the 31st minute in the thrilling Round 11 clash before Santi Cazorla scored the equaliser in the 42nd minute with a penalty kick.

This result raised Al Sadd's balance to 29 points, seven clear of their closest opponent Al Gharafa who were also involved in a one-all draw with Umm Salal. With one point added to their total (19) Qatar SC made it the top four depending on the goal difference. Qatar SC and Al Ahli now have same number of points.

However, it was Qatar SC who took the lead against the run of play when Okpotu took advantage of a defensive mistake committed by Tareq Salman.

Al Sadd had much more of the ball, but the teams took the half-time break with a 1-1 scoreline.

Qatar SC’s substitute Eisa Ahmed had a chance to give his side the lead a second time, but his shot was blocked by the goalkeeper in the 80th minute.

Soon, Bounedjah shot wide of the target and Cazorla too hit wide, in the 90th minute, as the deadlock continued.

Elsewhere, Al Wakrah became the only team to grab full points yesterday when they recorded a 2-1 win against  Al Kharaitiyat.

At Al Duhail Stadium yesterday, Al Kharaitiyat took the lead in the 21st minute through a goal by Mahmoud Saad before Malian international Ousmane Coulibaly scored the equaliser in the 43rd minute. Jassim Ali added the second goal in the 90th minute to take Al Wakrah’s points tally to 13 as they climbed three spots in the QSL standings.

Later at the same venue, Al Gharafa and Umm Salal shared points after their Round 11 match ended in a 1-1 draw.

Sofiane Hanni opened the scoring for Al Gharafa by converting a penalty in the 12th minute, while Kayke Rodrigues equalised for Umm Salal in the next minute of the hard-fought match.

Al Gharafa showed intent early on attacking Umm Salal from the first minute. The former champions even won a corner kick in the first 40 seconds.

Al Gharafa continued with an attacking game and Jonathan Kodjia broke into the Umm Salal box in the sixth minute. Kodjia, who dominated throughout the match, fired a bullet from close range, but his shot was blocked by keeper Baba Malick.

Kodjia managed a repeat attack in the ninth minute and this time his shot went to the left of keeper Malick.

Al Gharafa opened the scoring off a penalty. Ahmed Alaaeldin charged towards the Umm Salal box despite being under pressure from Aymen Abdennour. Just as he entered the box, Umm Salal keeper Malick stepped out and produced a sliding tackle that brought down Ahmed Alaaeldin.

The referee pointed to the spot and Hanni converted the penalty.

Umm Salal’s reply came when Adel Alawi clipped in a neat cross for Rodrigues who arrived with perfect timing to deflect the ball on the volley from close range as their fans celebrated the equaliser.