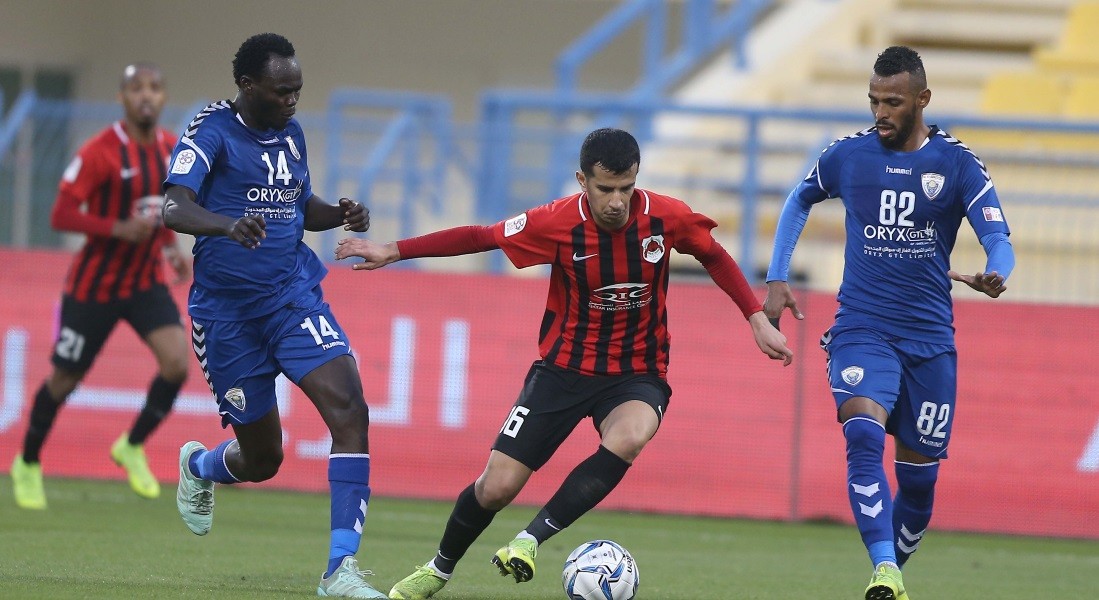 Al Kharaitiyat and Al Gharafa will face off in the QSL Cup semifinals following their quarterfinal victories at the Al Gharafa Stadium on Friday.

The semifinals will be played on 26th January.

Al Kharaitiyat were the first side to progress through to the QSL Cup semifinals after a tremendous 3-2 away victory over Al Rayyan at the Al Gharafa Stadium on Friday.

The match kicked off at a frenetic pace and Al Kharaitiyat were rewarded for their early efforts when Amin popped up unmarked at the near post to flick a header into the net from a corner.

Barely 10 minutes had passed when Amin was again on hand, this time with a piece of individual brilliance. With the defence failing to clear a free-kick into the box, Amin received the ball in a tight position and beautifully whipped in a curled shot that left the goalkeeper with no chance.

Already at a disadvantage, Al Rayyan were in further trouble midway through the half when Rodrigo Tabata was sent off after lashing out at Mehad Al Khamasi.

In spite of the numerical disadvantage, Al Rayyan grew into the game with Soria having a host of chances and gave his team a lifeline when he converted a cross at the near post.

With the game drifting towards the finale, Soria scored the equaliser as he ran onto a Lucca Borges pass. The match was heading for extra time when substitute Raza headed home from close range to send Al Kharaitiyat through.

Al Gharafa secured the second semifinal spot with a 1-0 victory in a testing encounter against Al Ahli at the Al Gharafa Stadium. The only goal of the night came from Diogo Amodo in the 62nd minute.

The match played out like a chess game from the outset, with neither side looking to give too much away as they aimed for the semifinal berth.

The greatest opportunity of the first half had come from an Al Gharafa counter-attack as Vladimir Weiss found Mouayed Fedially free in the box. However, he miscued with the goal in plain sight.

Later on, Nigel de Jong looked to deceive the keeper as he disguised his goal-bound free-kick, but Abdulla Abdo was equal to it.

The moment of the match came midway through the second half when Amado rose highest to meet a drifted corner kick and his header from distance was sumptuously directed into the goal via the inside post.

Weiss nearly doubled the lead late on, but his drive was spectacularly parried by opposition goalkeeper Ivanildo Rodriguez, who was on hand again when his goal came under attack from Othman Al Yahri.